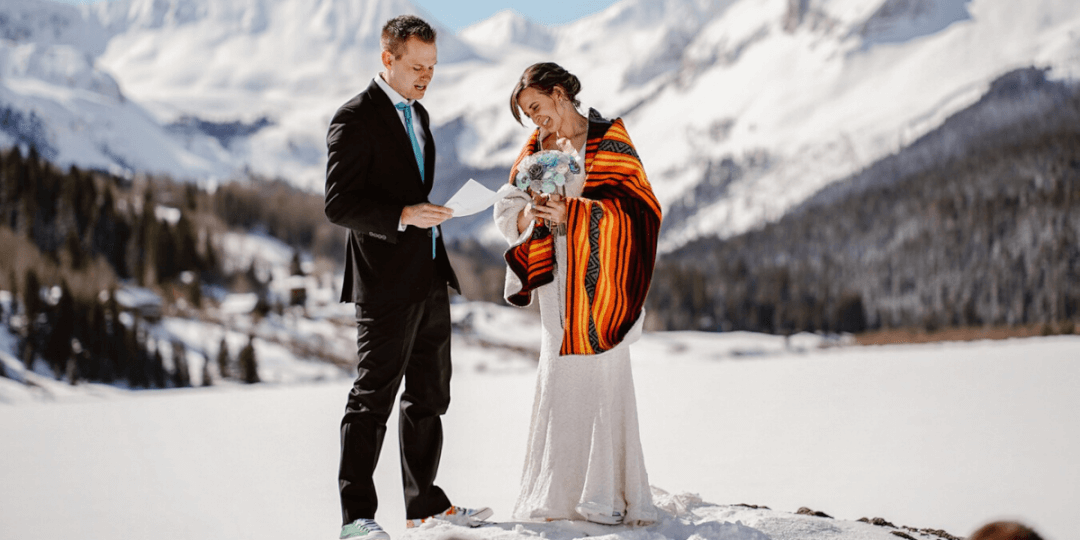 Kate & James chose to have an adventure elopement. What’s that? It’s when a couple chooses to go out into nature to have an intimate wedding ceremony, surrounded by gorgeous scenery. More and more couples are choosing to elope instead of having big, traditional weddings.

Even better news for couples looking to tie the knot in Colorado, like Kate & James, or in Pennsylvania like me and my husband… you don’t need an officiant! Look into self-uniting marriage licenses or self solemnization where you’ll be getting married. You can totally forgo an officiant (that’s what we did!), or have anyone stand in as one, without having to worry about them being ordained.

With an intimate ceremony like in an adventure elopement, every detail matters. Choosing wood flowers is a great option – they can be any color you’d like, while keeping a natural feel, and they become a daily reminder of your adventure when placed in a vase in your home!

Since I knew that Kate and James would be hiking a bit to get to their ceremony area, I used some of my most sturdy flowers. 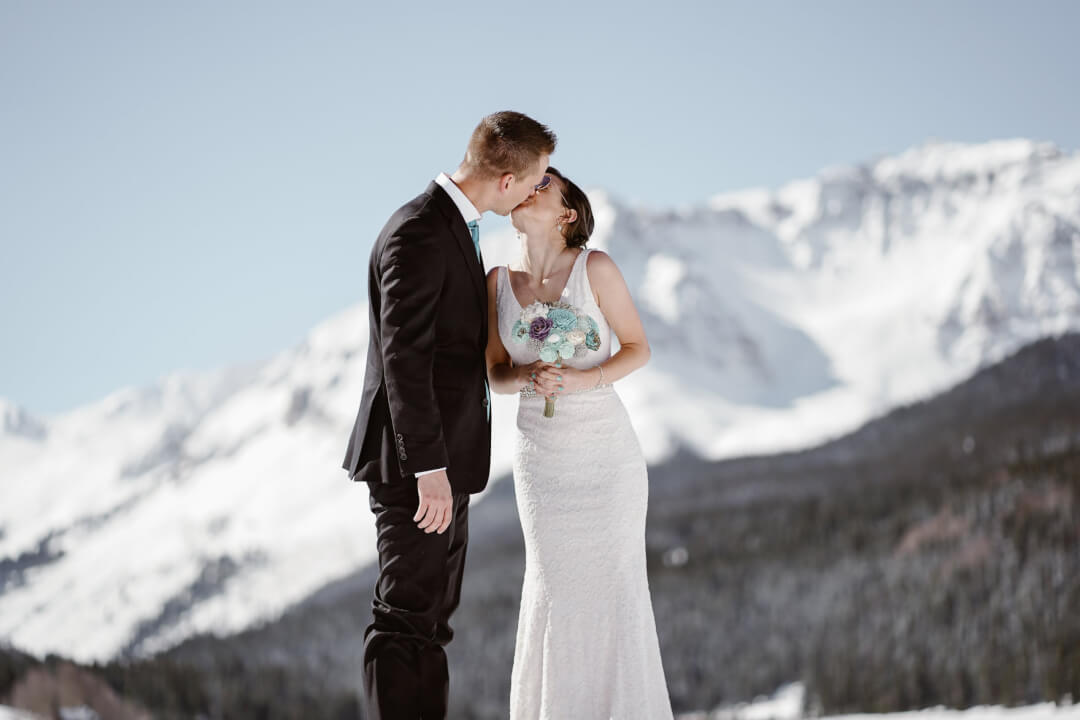 What is their engagement story?

James had plans to propose to Kate during spring break, while they were skiing a mountain in Loveland. He even planned out a scavenger hunt of Panda Express boxes, with clues inside, on the different ski runs. He figured doing it this way, he would be able to convince Kate to go skiing every year! He booked a nice hotel in the mountains with a rooftop hot tub! But then there was a horrible snowstorm and they had to skip skiing, and drove through the night to get to the hotel before the snowstorm.

Fast forward a while, to Memorial Day Weekend, and James planned a trip to Telluride, Colorado. The annual film festival was going on at the time, so they got tickets, but James told Kate that she wasn’t allowed to research the town! After arriving, Kate & James hiked 2 miles to a huge waterfall at Bear Creek Falls. James laid out a picnic on a huge rock at the base of the waterfall. He had Kate’s ring in a Panda Express box, Build-A-Bear animals they had given each other, and flowers! He knelt down, gave an adorable speech, and Kate said yes! 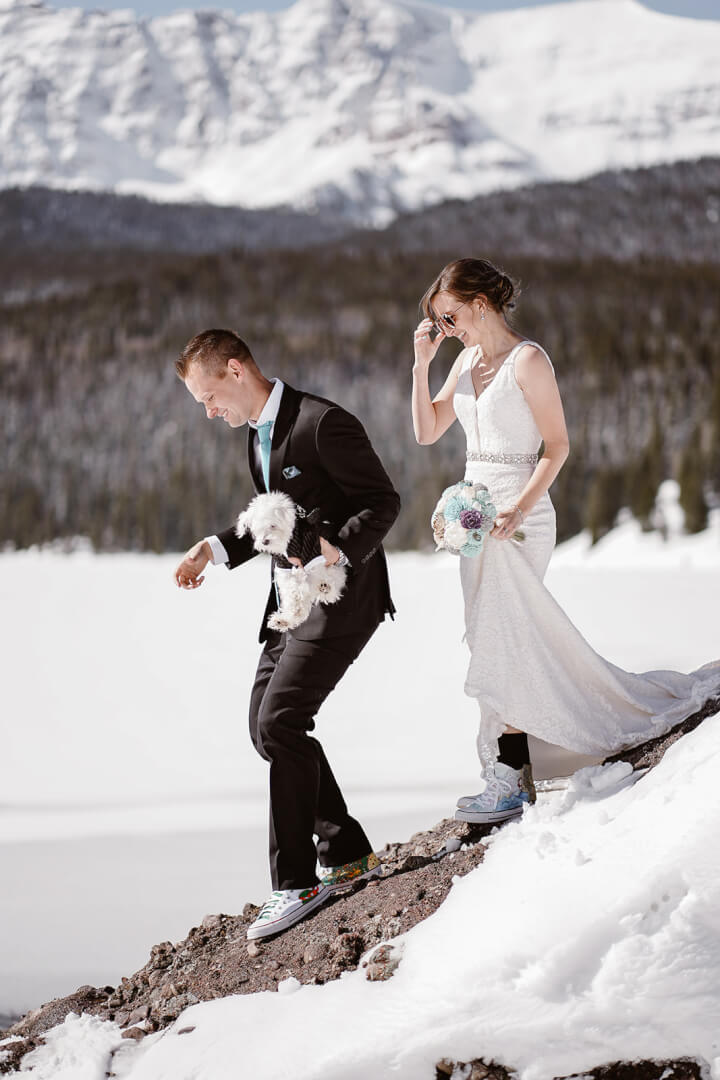 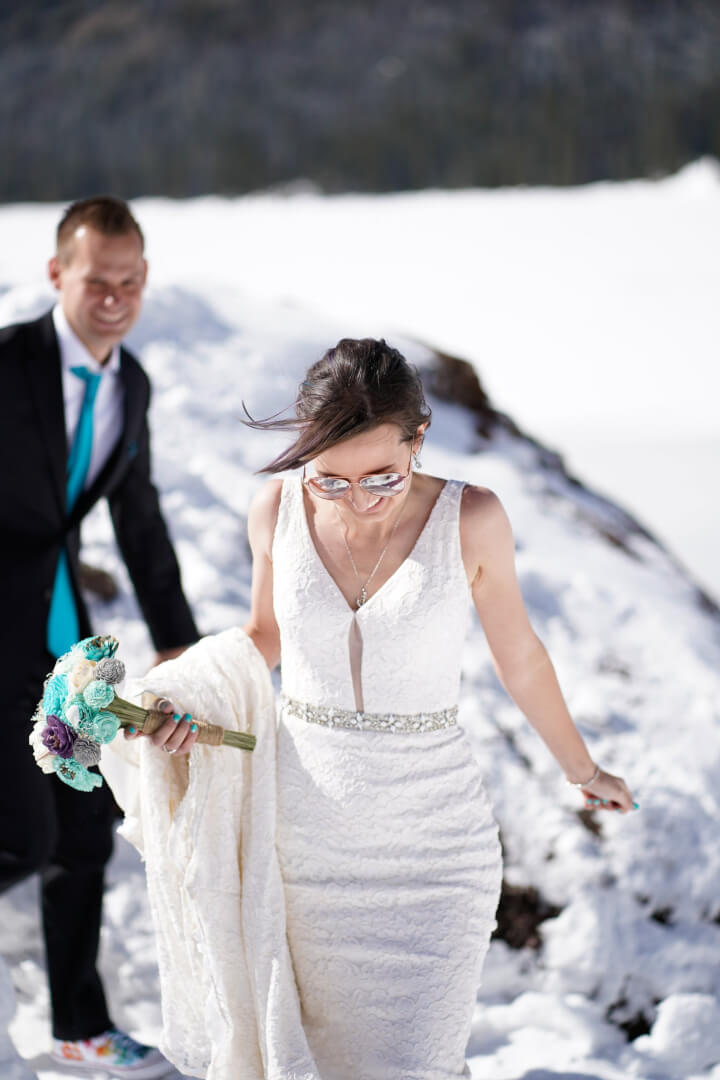 What made their wedding day memorable?
Short answer: all of it.

Their plans for an adventure elopement were almost ruined because of a large amount of late snowfall. There were closed roads earlier in the week, and an avalanche on the trail! That meant they couldn’t get married at the waterfall where they got engaged.

When planning an adventure elopement… Always have a backup plan

Thanks to their photographer‘s knowledge of the area, he suggested Grand Lake as a second option. Since everyone was in different cars, though, and there was no service. Kate, James, their family members, and the photographer all drove around the mountain for a while, looking for each other!

They finally all found each other and made it down to the lake. When they got to the lake, there was a giant rock and the couple decided to get married right there! Some of their family members shoveled a path/aisle with shovels they found nearby. Then, James cleared off the rock. Kate knew that James would find a way for them to get on it for the ceremony. 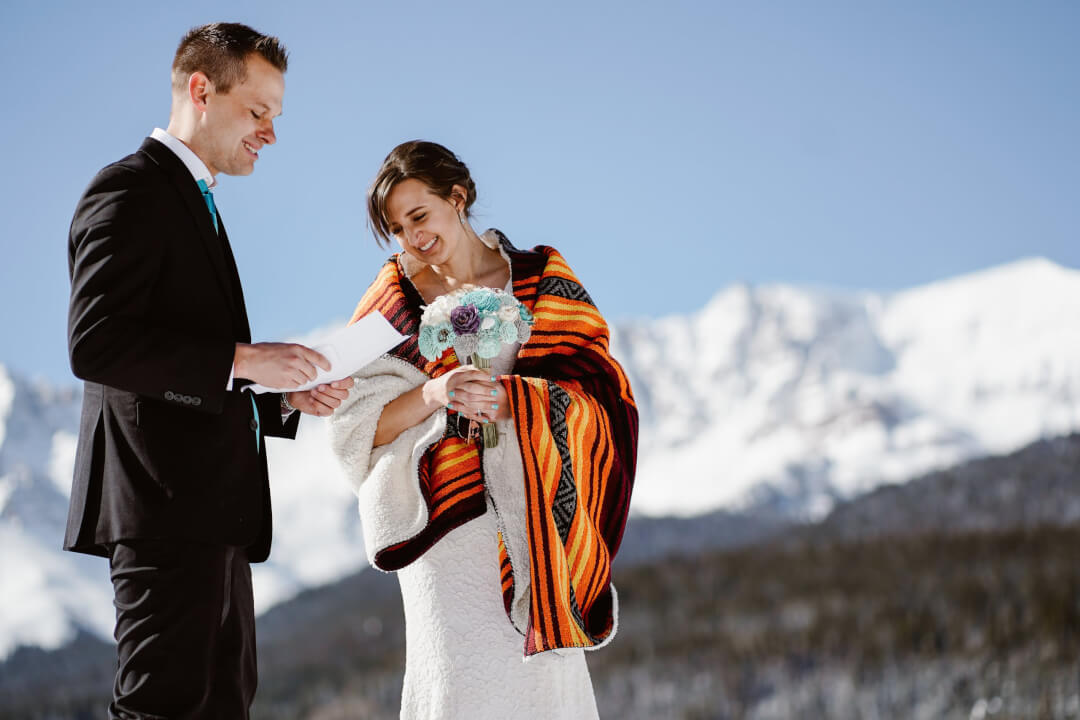 Kate’s dog was their ring bearer, Kate’s brother had flown in from Boston and officiated, and a few more of Kate’s relatives made the trip from other states.

It actually ended up working out better than they had planned! Some of their relatives may not have been up for the hike to the waterfall, so with getting married at the lake, everyone could just step out of the car and be right where the vows were taking place!

After the wedding, everyone spent the weekend at the Telluride Mountain Film Festival! 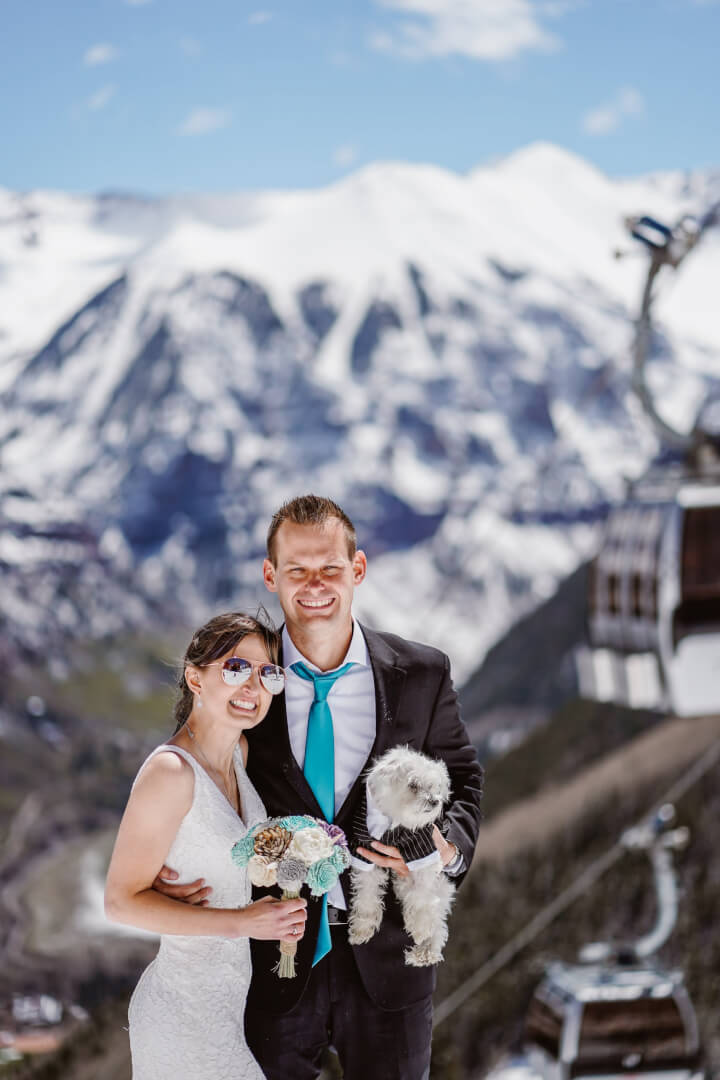 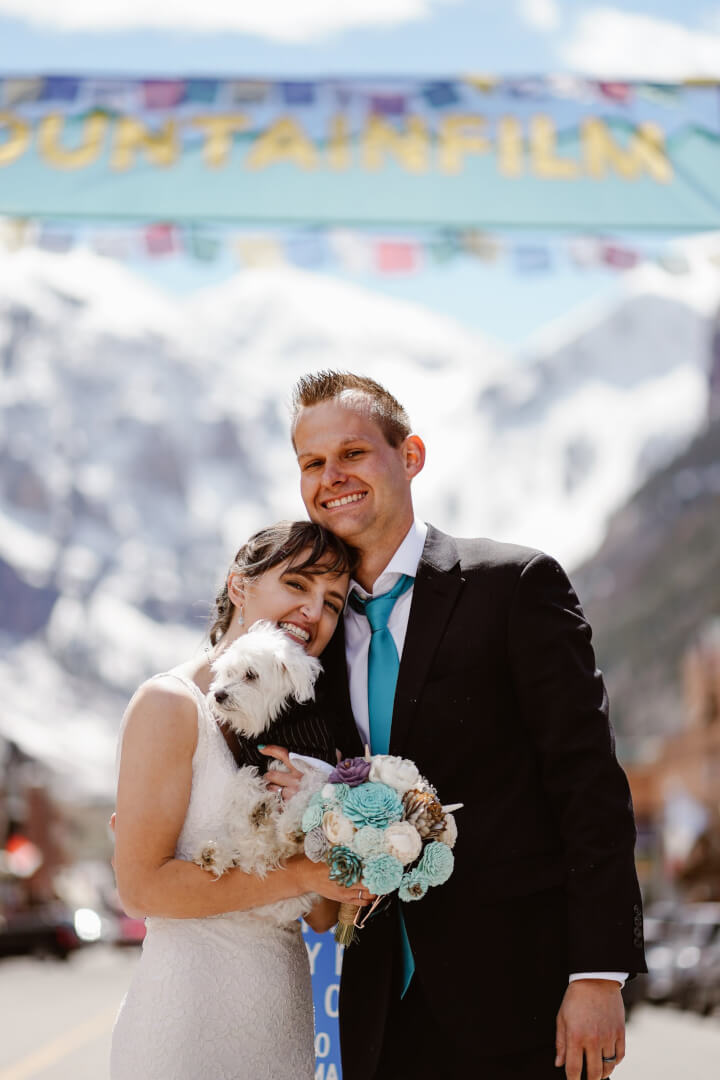 “I love that they last forever, I am also so happy that I was able to have them customized!! We added seashells and a peony for my grandma, and a purple lotus for my husband’s mom. It made it so that, even though we were having a mini wedding, there was still a lot of meaning in the details.

I have been telling everyone about Heart and Sola Creations & I would recommend them to anyone looking to get flowers that will last them forever. The quality is amazing, the coloring is spot on, the option to personalize the bouquet is awesome and overall you can’t go wrong!”